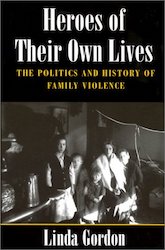 Linda Gordon. Heroes of Their Own Lives: The Politics and History of Family Violence–Boston, 1880-1960. University of Illinois Press, 2002.

In this unflinching history of family violence, the historian Linda Gordon traces policies on child abuse and neglect, wife-beating, and incest from 1880 to 1960. Drawing on hundreds of case records from social agencies devoted to dealing with the problem, Gordon chronicles the changing visibility of family violence as gender, family, and political ideologies shifted.

From the “discovery” of family violence in the 1870s–-when it was first identified as a social, rather than personal, problem–-to the women’s and civil rights movements of the twentieth century, Heroes of Their Own Lives illustrates how public perceptions of marriage, poverty, alcoholism, mental illness, and responsibility worked for and against the victims of family violence.

Powerful, moving, and tightly argued, Heroes of Their Own Lives shows family violence to be an indicator of larger social problems. Examining its sources as well as its treatment, Gordon offers both an honest understanding of the problem and an unromantic view of the difficulties in stopping it.