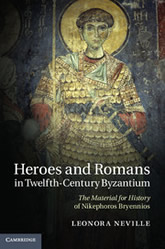 Nikephoros Bryennios’ history of the Byzantine Empire in the 1070s is a story of civil war and aristocratic rebellion in the midst of the Turkish conquest of Anatolia. Commonly remembered as the passive and unambitious husband of Princess Anna Komnene (author of the Alexiad), Bryennios is revealed as a skilled author whose history draws on cultural memories of classical Roman honor and proper masculinity to evaluate the politicians of the 1070s and implicitly to exhort his twelfth-century contemporaries to honorable behavior. Bryennios’ story valorizes the memory of his grandfather and other honorable, but failed, generals of the eleventh century while subtly portraying the victorious Alexios Komnenos as un-Roman. This reading of the Material for History sheds new light on twelfth-century Byzantine culture and politics, especially the contested accession of John Komnenos, the relationship between Bryennios’ history and the Alexiad and the function of cultural memories of Roman honor in Byzantium.