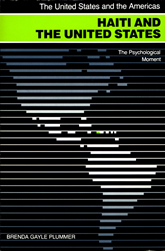 In a prescient remark made at the turn of the century, U.S. Secretary of State Elihu Root said that establishing “the right sort of relations” with Haiti must await “the psychological moment.” Indeed, as Brenda Gayle Plummer notes, much of the Haitian-U.S. relationship has turned on matters of perception. For many in the United States, tales of voodoo, political violence, and stark deprivation have made Haiti appear to be a doomed land, beyond comprehension and help. Haitians, meanwhile, have often seen the United States as persistently racist, grossly materialist, and lacking in spiritual values.

In Haiti and the United States, Plummer pays special attention to the role of social and cultural factors in the two countries’ views of each other and the manner in which relations have developed as a result of those perceptions. The disparities between the two republics, she notes, are all the more remarkable in that their experiences of anticolonial rebellion and nationhood converged in some striking ways. Despite the parallels, however, the varying cultural and racial identities of Haiti and the United States and the sociohistorical context in which those identities have been construed forced them to confront the challenges of slavery, republicanism, democracy, and economic development quite differently.

Stressing the importance of domestic policy and the character of civil society in the formation of foreign policy, Plummer illuminates the various factors that figured in the relationship between the two countries throughout the nineteenth century. She discussed the aspirations of Haiti’s founders in building a self-governing black society, Haitian responses to the transatlantic abolition movement, the development of Haiti’s creole culture, and the country’s shrewd negotiations with the United States over commercial and strategic issues. The late 1800s, Plummer shows, proved a turning point in Haitian-U.S. relations as Washington’s assumption of regional hegemony changed the balance of power for a Haiti long committed to a multilateralist diplomacy.

In the twentieth century, tensions between traditional and reformist elements in Haitian society erupted in a crisis that brought U.S. intervention and long-term military occupation. Plummer examines the consequences of this intervention as they were incorporated into the later interactions between the United States and Haiti and shows how these troubled relations contributed to the rise of the repressive Duvalier regime. The recent fall of that regime, Plummer suggests, now presents the “psychological moment” to which Elihu Root referred so many years ago.

Haiti and the United States is the first history of the relationship between the two countries to be published since the 1940s. Utilizing a wealth of Haitian sources as well as the voluminous state papers in the National Archives of the United States and the Library of Congress, the book also benefits from methodological and conceptual advances in diplomatic history over the past half-century.