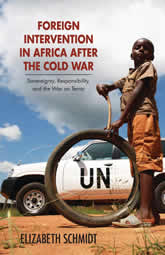 Elizabeth Schmidt. Foreign Intervention in Africa After the Cold War: Sovereignty, Responsibility, and the War on Terror. Ohio University Press, 2018.

In Foreign Intervention in Africa after the Cold War—interdisciplinary in approach and intended for nonspecialists—Elizabeth Schmidt provides a new framework for thinking about foreign political and military intervention in Africa, its purposes, and its consequences. She focuses on the quarter century following the Cold War (1991–2017), when neighboring states and subregional, regional, and global organizations and networks joined extracontinental powers in support of diverse forces in the war-making and peace-building processes. During this period, two rationales were used to justify intervention: a response to instability, with the corollary of responsibility to protect, and the war on terror.

Often overlooked in discussions of poverty and violence in Africa is the fact that many of the challenges facing the continent today are rooted in colonial political and economic practices, in Cold War alliances, and in attempts by outsiders to influence African political and economic systems during the decolonization and postindependence periods. Although conflicts in Africa emerged from local issues, external political and military interventions altered their dynamics and rendered them more lethal. Foreign Intervention in Africa after the Cold War counters oversimplification and distortions and offers a new continentwide perspective, illuminated by trenchant case studies.