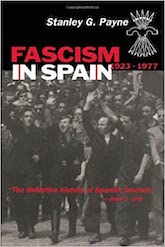 Fascism in Spain, 1923–1977, by celebrated historian Stanley G. Payne, is the most comprehensive history of Spanish fascism to appear in any language. This authoritative study offers treatment of all the major doctrines, personalities, and defining features of the Spanish fascist movement, from its beginnings until after the death of General Francisco Franco in 1975.

Payne describes and analyzes the development of the Falangist party both prior to and during the Spanish Civil War, presenting a detailed analysis of its transformation into the state party of the Franco regime—Falange Española Tradicionalista—as well as its ultimate conversion into the pseudofascist Movimiento Nacional. Payne devotes particular attention to the crucial years 1939–1942, when the Falangists endeavored to expand their influence and convert the Franco regime into a fully Fascist system. Fascism in Spain helps us to understand the personality of Franco, the way in which he handled conflict within the regime, and the reasons for the long survival of his rule. Payne concludes with the first full inquiry into the process of “defascistization,” which began with the fall of Mussolini in 1943 and extended through the Franco regime’s later efforts to transform the party into a more viable political entity.