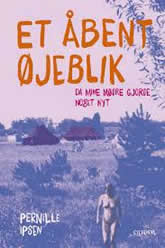 English Translation of title: “An Open Moment: When My Mothers Created Something New”

An Open Moment recounts the history of the modern Danish women’s movement through the lives of seven women who helped start and organize it in 1970 and lived together in a women-only commune from 1971-1976. Pernille Ipsen spend her first years in this commune and called each of the seven women ”mother.” In An Open Moment she uses her unique access to and relationship with the Danish women’s movement to tell a history of her mothers’ radicalization as feminists, their years in the women’s movement, and, finally, how their commune—like the larger movement of which it was part—split along lines of sexuality. Centering on specific life-experiences of a small group of women who lived amid women’s and lesbian politics in the early 1970s, allows for an exploration of how second-wave feminists lived in and with their social revolution. Together their histories are a window into a moment of radical social change in Scandinavia, Europe and the larger world in the 1970s. In short, An Open Moment suggests that the early 1970s was a particularly open moment in feminist politics in Denmark—a moment filled with such possibilities for radical change in our understanding of gender and sexuality that its effects reverberates today.