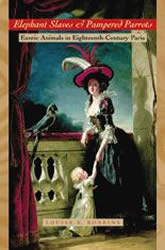 In 1775, a visitor to Laurent Spinacuta’s Grande Ménagerie at the annual winter fair in Paris would have seen two tigers, several kinds of monkeys, an armadillo, an ocelot, and a condor—in all, forty-two live animals. In Elephant Slaves and Pampered Parrots, Louise Robbins explains that exotic animals from around the world were common in eighteenth-century Paris. In the streets of the city, residents and visitors could observe performing elephants and a fighting polar bear. Those looking for unusual pets could purchase parrots, flying squirrels, and capuchin monkeys. The royal menagerie at Versailles displayed lions, cranes, an elephant, a rhinoceros, and a zebra, which in 1760 became a major court attraction.

For Enlightenment-era Parisians, exotic animals both piqued scientific curiosity and conveyed social status. Their availability was a boon for naturalists like Buffon, author of the best-selling Histoire naturelle, who observed unusual species in a variety of locations around the city. Louis XVI saw his menagerie as a manifestation of his power and funded its upkeep accordingly, while critics used the caged animals as metaphors of slavery and political oppression amidst the growing political turmoil. In her engaging and often surprising account, Robbins considers nearly every aspect of France’s obsession with exotic fauna, from the vast literature on exotic animals and the inner workings of the oiseleurs’ (birdsellers’) guild to how the animals were transported, housed, and cared for. Based on wide-ranging and imaginative research, Elephant Slaves and Pampered Parrots stands as a major contribution to the history of human-animal relations, eighteenth-century culture, and French colonialism.