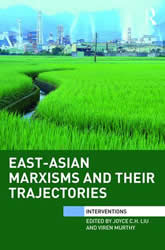 In this volume, leading scholars from around the world suggest that radical ideologies have shaped complex historical processes in East Asia by examining how intellectuals and activists interpreted, rethought and criticized Marxism in East Asia. The contributors to this volume ask how we can use Marxism to understand East Asia in a global capitalist world, and where the problems that Marxism highlighted, including imperialism, domination and inequality, are increasingly prevalent.

The volume draws on various disciplines to reinterpret Marx, and shed light on the complex dynamics of global capitalism in various historical/national contexts. The distinguished contributors illuminate, rethink and make accessible highly complex Marxist concepts, such as the question of class contradiction, the temporalities of capitalism, real and formal subsumption, relative surplus value and the commodity form, the question of class and the proletariat.

At a time when people around the world are struggling to cope with the crises of global capitalism, this volume on regional responses to capitalism is especially welcome. It will be of interest to students and scholars of East Asian studies, social and political theory, sociology and globalization studies.