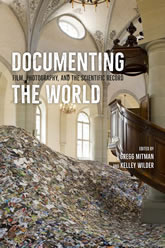 Imagine the twentieth century without photography and film. Its history would be absent of images that define historical moments and generations: the death camps of Auschwitz, the assassination of John F. Kennedy, the Apollo lunar landing. It would be a history, in other words, of just artists’ renderings and the spoken and written word. To inhabitants of the twenty-first century, deeply immersed in visual culture, such a history seems insubstantial, imprecise, and even, perhaps, unscientific.

Documenting the World is about the material and social life of photographs and film made in the scientific quest to document the world. Drawing on scholars from the fields of art history, visual anthropology, and science and technology studies, the chapters in this book explore how this documentation—from the initial recording of images, to their acquisition and storage, to their circulation—has altered our lives, our ways of knowing, our social and economic relationships, and even our surroundings. Far beyond mere illustration, photography and film have become an integral, transformative part of the world they seek to show us.