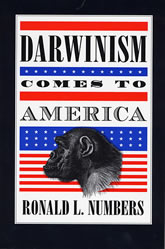 In 1997, even as Pope John Paul II was conceding that evolution was “more than just a theory,” local school boards and state legislatures were still wrangling over the teaching of origins—and nearly half of all Americans polled believed in the recent special creation of the first humans. Why do so many Americans still resist the ideas laid out by Darwin in On the Origin of Species? Focusing on crucial aspects of the history of Darwinism in America, Ronald Numbers gets to the heart of this question.

Judiciously assessing the facts, Numbers refutes a host of widespread misconceptions: about the impact of Darwin’s work on the religious ideas of scientists, about the character of the issues that exercised scientists of the immediate post-Darwin generation, about the Scopes trial of 1925 and its consequences for American schools, and about the regional and denominational distribution of pro- and anti-evolutionary sentiments.

Displaying the expertise that has made Numbers one of the most respected historians of his generation, Darwinism Comes to America provides a much-needed historical perspective on today’s quarrels about creationism and evolution—and illuminates the specifically American nature of this struggle.