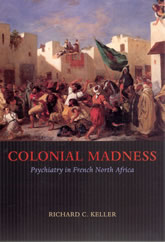 Nineteenth-century French writers and travelers imagined Muslim colonies in North Africa to be realms of savage violence, lurid sexuality, and primitive madness. Colonial Madness traces the genealogy and development of this idea from the beginnings of colonial expansion to the present, revealing the ways in which psychiatry has been at once a weapon in the arsenal of colonial racism, an innovative branch of medical science, and a mechanism for negotiating the meaning of difference for republican citizenship.

Drawing from extensive archival research and fieldwork in France and North Africa, Richard Keller offers much more than a history of colonial psychology. Colonial Madness explores the notion of what French thinkers saw as an inherent mental, intellectual, and behavioral rift marked by the Mediterranean, as well as the idea of the colonies as an experimental space freed from the limitations of metropolitan society and reason. These ideas have modern relevance, Keller argues, reflected in French thought about race and debates over immigration and France’s postcolonial legacy.