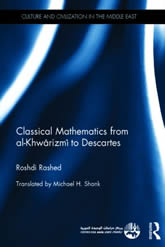 ‘Early modern,’ mathematics is a term widely used to refer to the mathematics which developed in the West during the sixteenth and seventeenth century. For many historians and philosophers this is the watershed which marks a radical departure from ‘classical mathematics,’ to more modern mathematics; heralding the arrival of algebra, geometrical algebra, and the mathematics of the continuous. In this book, Roshdi Rashed demonstrates that ‘early modern,’ mathematics is actually far more composite than previously assumed, with each branch having different traceable origins which span the millennium. Going back to the beginning of these parts, the aim of this book is to identify the concepts and practices of key figures in their development, thereby presenting a fuller reality of these mathematics.