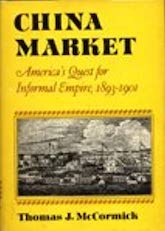 Of all the world’s mercantile lures, none was more persistent or more mesmeric for Americans than the fabled Far Eastern markets. In the 1890s, United States commercial expansion into the Pacific catapulted the nation to the status of a great power. In describing and analyzing American ambitions in China which led to the Open Door negotiations, Mr. McCormick argues that American leaders rationally and pragmatically sought the China market in order to absorb American “overproduction” and achieve domestic stability. The dilemmas that emerged from the nature of American aims and policies were to plague the United States throughout the twentieth century.