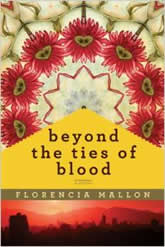 Florencia Mallon. Beyond the Ties of Blood. Pegasus Books, 2012.

In the tradition of Isabel Allende, the debut novel from Chilean-American Florencia Mellon—a family saga that explores the lives touched by the tragedies of Chile’s vibrant history.

In the political aftermath of the 1973 Chilean coup, Eugenia Aldunate is imprisoned and tortured. Her lover, Manuel, is savagely killed, one of the countless “disappeared” that would haunt Chile’s collective memory for decades. While still in the torture camp, Eugenia discovers she is pregnant and is exiled to Mexico and then to the United States to raise her daughter alone, forbidden to return. She builds a quiet life for herself as a journalist and professor, but the scars on her arms do not allow her to bury her past. Each night she aches for her homeland while fighting to suppress the horrific nightmares that still plague her. Nearly twenty years after her exile, Eugenia is called back to Chile to testify in Manuel’s case and help seek justice for the others who disappeared. A rare living witness to these “camps,” Eugenia must come to grips with the legacy of violence and traumas left by Pinochet’s dictatorship and find truth and solace in the stories of those she left behind. In the tradition of Kiran Desai’s The Inheritance of Loss and Julia Alvarez’s In the Time of Butterflies, Beyond the Ties of Blood is a tribute to the resilience of the human spirit and the transcendence of family.