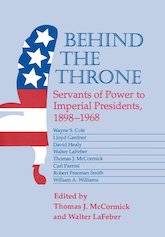 Walter LaFeber (Editor). Behind the Throne Servants of Power to Imperial Presidents, 1898–1968. University of Wisconsin Press, 1993.

During the American rise to world power in the last hundred years, a new presidency has also arisen, a presidency that uses military, economic, political, and personal power that the constitutional founders of the 1780s would have thought highly improbable and dangerous. Behind the Throne argues that United States presidents have received foreign policy advice from a new breed of government servants whose first loyalties were to the chief executive, not the bureaucracy or the public. These “servants of power” defined world views for the president, not only advising but often taking action to implement those world views.

The essays in this volume focus on nine servants of power: Brooks Adams, Charles A. Conant, Admiral William B. Caperton, Thomas W. Lamont, Adolf A. Berle, Thomas C. Mann, McGeorge Bundy, Arthur H. Vandenberg, and Gerald P. Nye. The rise of the United States to the status of the world’s lone (and often highly perplexed and frustrated) superpower cannot be understood without understanding these nine influential men and their roles in recent American history.

The volume also stands as a tribute to Fred Harvey Harrington, professor of history and former president of the University of Wisconsin–Madison. All of the contributors began their distinguished careers as students of Harrington.