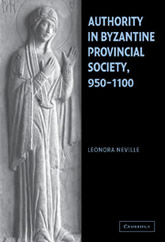 Acting essentially to maintain power and collect taxes, the emperors of the Byzantine Empire (ca. 950-1100) did not attempt to govern provincial society. As a result, provincial households took advantage of this situation by competing for local control over each other whenever they could. This book describes the power-holders in the central provinces in a detailed comparison of the provincial strength of the imperial government and the mechanics of local authority.