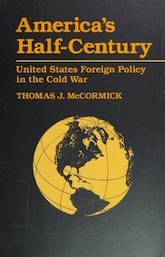 Did the United States “win” the Cold War? In its self-congratulatory euphoria, argues Thomas McCormick in this new edition of his highly acclaimed study, America neglected a twenty-year process of political and economic devolution—the real threat to global peace and prosperity. Revised and updated through 1993, it describes how the end of the Cold War affected the United States’s global role as well as suggesting what possibilities lie ahead for a restructured world-system.