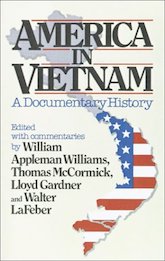 Through a wide variety of documents—including newly opened presidential papers, congressional debates, military reports, treaties, and newspaper articles—the authors trace the origins of the war back to pre–World War II attitudes and then proceed through the development of the “domino theory” and the policies of Truman, Eisenhower, Kennedy, Johnson, and Nixon to the fall of South Vietnam in 1975.

Each of the editors has written an introductory essay to place the documents in heir historical context. These essays explore the controversial questions raised by Vietnam—such as whether each president understood what he was getting into, whether (as some now charge) the media and public opinion undermined America’s ability to win the war, whether official statements were intended to mislead the American people, and, most fundamentally, why America was in Vietnam.