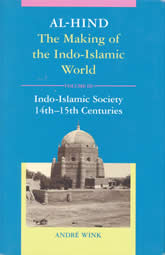 This third volume of Andre Wink’s acclaimed and pioneering Al-Hind:The Making of the Indo-Islamic World takes the reader from the late Mongol invasions to the end of the medieval period and the beginnings of early modern times in the late fifteenth and early sixteenth century. It breaks new ground by focusing attention on the role of geography, and more specifically on the interplay of nomadic, settled and maritime societies. In doing so, it presents a picture of the world of India and the Indian Ocean on the eve of the Portuguese discovery of the searoute: a world without stable parameters, of pervasive geophysical change, inchoate and instable urbanism, highly volatile and itinerant elites of nomadic origin, far-flung merchant diasporas, and a famine- and disease-prone peasantry whose life was a gamble on the monsoon.