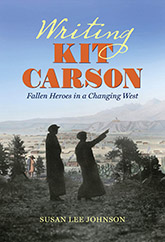 Susan Lee Johnson. Writing Kit Carson Fallen Heroes in a Changing West. University of North Carolina Press, 2020.
In this critical biography, Susan Lee Johnson braids together lives over time and space, telling tales of two white women who, in the 1960s, wrote books about the fabled frontiersman Christopher “Kit” Carson: Quantrille McClung, a Denver librarian who compiled the Carson-Bent-Boggs Genealogy, and Kansas-born but Washington, D.C.- and Chicago-based Bernice Blackwelder, a singer on stage and radio, a CIA employee, and the author of Great Westerner: The Story of Kit Carson. In the 1970s, as once-celebrated figures like Carson were falling headlong from grace, these two amateur historians kept weaving stories of western white men, including those who married American Indian and Spanish Mexican women, just as Carson had wed Singing Grass, Making Out Road, and Josefa Jaramillo.Johnson’s multilayered biography reveals the nature of relationships between women historians and male historical subjects and between history buffs and professional historians. It explores the practice of history in the context of everyday life, the seductions of gender in the context of racialized power, and the strange contours of twentieth-century relationships predicated on nineteenth-century pasts. On the surface, it tells a story of lives tangled across generation and geography. Underneath run probing questions about how we know about the past and how that knowledge is shaped by the conditions of our knowing.

Published in association with the William P. Clements Center for Southwest Studies at Southern Methodist University in Dallas, Texas