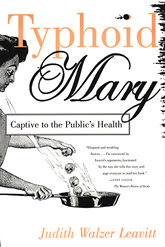 She was an Irish immigrant cook. Between 1900 and 1907, she infected twenty-two New Yorkers with typhoid fever through her puddings and cakes; one of them died. Tracked down through epidemiological detective work, she was finally apprehended as she hid behind a barricade of trashcans. To protect the public’s health, authorities isolated her on Manhattan’s North Brother Island, where she died some thirty years later.

This book tells the remarkable story of Mary Mallon–the real Typhoid Mary. Combining social history with biography, historian Judith Leavitt re-creates early-twentieth-century New York City, a world of strict class divisions and prejudice against immigrants and women. Leavitt engages the reader with the excitement of the early days of microbiology and brings to life the conflicting perspectives of journalists, public health officials, the law, and Mary Mallon herself.

Leavitt’s readable account illuminates dilemmas that continue to haunt us. To what degree are we willing to sacrifice individual liberty to protect the public’s health? How far should we go in the age of AIDS, drug-resistant tuberculosis, and other diseases? For anyone who is concerned about the threats and quandaries posed by new epidemics, Typhoid Mary is a vivid reminder of the human side of disease and disease control.