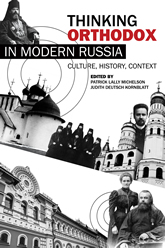 Thinking Orthodox in Modern Russia illuminates the significant role of Russian Orthodox thought in shaping the discourse of educated society during the imperial and early Soviet periods. Bringing together an array of scholars, this book demonstrates that Orthodox reflections on spiritual, philosophical, and aesthetic issues of the day informed much of Russia’s intellectual and cultural climate.

Volume editors Patrick Lally Michelson and Judith Deutsch Kornblatt provide a historical overview of Russian Orthodox thought and a critical essay on the current state of scholarship about religious thought in modern Russia. The contributors explore a wide range of topics, including Orthodox claims to a unique religious Enlightenment, contests over authority within the Russian Church, tensions between faith and reason in academic Orthodoxy, the relationship between sacraments and the self, the religious foundations of philosophical and legal categories, and the effect of Orthodox categories in the formation of Russian literature.