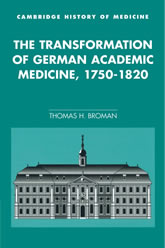 Thomas H. Broman. The Transformation of German Academic Medicine, 1750-1820. University of Chicago Press, 1996.
By examining German university medicine between 1750 and 1820, this book presents a new interpretation of the emergence of modern medical science. It demonstrates that the development of modern medicine as a profession linking theory and practice did not emerge suddenly from the revolutionary transformation of Europe at the opening of the nineteenth century, as Foucault and others have argued. Instead, Thomas H. Broman points to cultural and institutional changes occurring during the second half of the eighteenth century as reshaping both medical theory and physician’s professional identity. Among the most important of these factors was the emergence of a literary public sphere in Germany between 1750 and 1800, a development that exposed medical writing to new discourses such as Jena Romanticism and created the stage on which would be played out the bitter medical controversies of the 1790s.
Read more