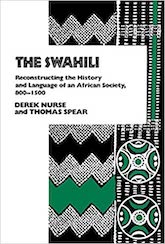 Derek Nurse, and Thomas Spear. The Swahili: Reconstructing the History and Language of an African Society, 800-1500. University of Pennsylvania Press, 1985.

“The authors, respectively a linguist specializing in Swahili and related Bantu languages and a historian specializing in the history of East Africa, have assembled an impressive array of evidence—linguistic, archaeological, documentary, and oral-traditional—in support of the argument that Swahili culture, often regarded as an Arabian transplant on the East African coast, is actually ‘a dynamic synthesis of African and Arabian ideas within an African historical and cultural context.'”—American Anthropologist

“A fine achievement, mixing original material, fresh insights, generally excellent use of sources, conciseness, and a highly readable style. As an introduction to how the history of an African society can be reconstructed from largely nonliterate sources, and to the Swahili in particular, it is almost a model work.”—International Journal of African Historical Studies