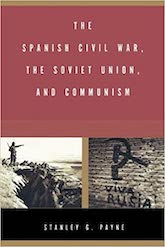 In this compelling book Stanley G. Payne offers the first comprehensive narrative of Soviet and Communist intervention in the revolution and civil war in Spain. He documents in unprecedented detail Soviet strategies, Comintern activities, and the role of the Communist party in Spain from the early 1930s to the end of the civil war in 1939.

Drawing on a very broad range of Soviet and Spanish primary sources, including many only recently available, Payne changes our understanding of Soviet and Communist intentions in Spain, of Stalin’s decision to intervene in the Spanish war, of the widely accepted characterization of the conflict as the struggle of fascism against democracy, and of the claim that Spain’s war constituted the opening round of World War II. The author arrives at a new view of the Spanish Civil War and concludes not only that the Democratic Republic had many undemocratic components but also that the position of the Communist party was by no means counterrevolutionary.