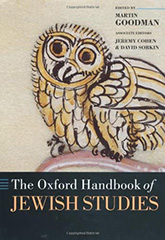 The Oxford Handbook of Jewish Studies covers all the main areas currently taught and researched as part of Jewish studies in universities throughout the world, especially in Europe, the United States, and Israel. The span of the volume chronologically and geographically is thus enormous, but all international contributors have in common their expertise in the study of the history, literature, religion, and culture of the Jews. Jewish studies is a comparatively young discipline which has grown over the past fifty years in a somewhat undisciplined way. In a period of great upheaval for Jews following the Holocaust, the creation of the State of Israel, the emergence of new forms of dialogue between Jews and Christians, deepening divisions between secular and religious Jews, and unprecedented assimilation by diaspora Jews to the wider culture, the study of Jewish traditions and history has rarely been dispassionate. There have been some attempts in recent years to encapsulate current conclusions about particular aspects of Jewish studies, but these other works aim to provide compendia of agreed facts rather than a survey of interests and directions such as is found in this text. The book begins with an examination of Jewish studies as an academic discipline in its own right. The first half of the volume is organized chronologically, followed by sections on languages and literature, general aspects of religion, and other branches of Jewish studies which have each accumulated a considerable corpus of scholarship over the past half-century.