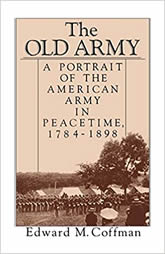 One of the most important works of military history published in the last decade, The Old Army is the only comprehensive study of the people who made up the “garrison world” in the peacetime intervals between the War for Independence and the Spanish-American War. Drawing on diaries, letters, and other primary documents, Edward M. Coffman vividly recreates the harsh, often lonely life of men, collected mostly from the streets of Northern cities, for whom enlistment was “a leap in the dark…a choice of evils.” He pays special attention to the roles of women and children, as well as black Americans, and to the development of military professionalism. From the testimony of those who lived it, Coffman traces the evolution of the American Army from “the days of small things”–of limited resources and downright hardship–to the modern military age that began at the turn of the century.