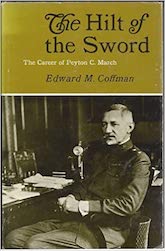 The Hilt of the Sword : The Career of Peyton C. March. University of Wisconsin Press, 1966.

Campaign and battle histories of the role of the United States army in World War I are plentiful, and yet historians have all but ignored the crucial administrative and institutional developments which made possible that army’s contribution to the Allied war effort. This new study by Edward M. Coffman does much to restore a true perspective. Concentrating on the important and controversial career of General Peyton C. March as Army Chief of Staff from 1918 to 1921, he uses the vehicle of biography to achieve a fascinating study of the military arm of the United States government at a time of profound change and drastic reorganization.