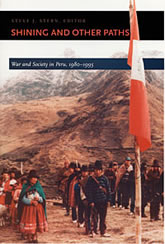 Shining and Other Paths offers the first systematic account of the social experiences at the heart of the war waged between Shining Path and the Peruvian military during the 1980s and early 1990s. Confronting and untangling the many myths and enigmas that surround the war and the wider history of twentieth-century Peru, this book presents clear and often poignant analyses of the brutal reshaping of life and politics during a war that cost tens of thousands of lives.

The contributors—a team of Peruvian and U.S. historians, social scientists, and human rights activists—explore the origins, social dynamics, and long-term consequences of the effort by Shining Path to effect an armed communist revolution. The book begins by interpreting Shining Path’s emergence and decision for war as one logical culmination, among several competing culminations, of trends in oppositional politics and social movements. It then traces the experiences of peasants and refugees to demonstrate how human struggle and resilience came together in grassroots determination to defeat Shining Path, and explores the unsuccessful efforts of urban shantytown dwellers, as well as rural and urban activists, to build a “third path” to social justice. Integral to this discussion is an examination of women’s activism and consciousness during the years of the crisis. Finally, this book analyzes the often paradoxical and unintended legacies of this tumultuous period for social and human rights movements, and for presidential and military leadership in Peru.

Extensive field research, broad historical vision, and strong editorial coordination enable the authors to write a coherent and deeply humanistic account, one that draws out the inner tragedies, ambiguities, and conflicts of the war.