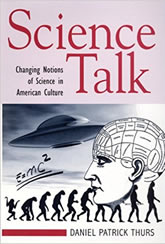 Science news is met by the public with a mixture of fascination and disengagement. On the one hand, Americans are inflamed by topics ranging from the question of whether or not Pluto is a planet to the ethics of stem-cell research. But the complexity of scientific research can also be confusing and overwhelming, causing many to divert their attentions elsewhere and leave science to the “experts.”

Whether they follow science news closely or not, Americans take for granted that discoveries in the sciences are occurring constantly. Few, however, stop to consider how these advances—and the debates they sometimes lead to—contribute to the changing definition of the term “science” itself. Going beyond the issue-centered debates, Daniel Patrick Thurs examines what these controversies say about how we understand science now and in the future. Drawing on his analysis of magazines, newspapers, journals and other forms of public discourse, Thurs describes how science—originally used as a synonym for general knowledge—became a term to distinguish particular subjects as elite forms of study accessible only to the highly educated.