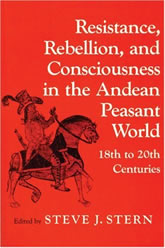 This collection of essays challenges our understanding of the history of native Andean rebellion during the last three centuries.

The contributors—historians and anthropologists from a number of countries—move beyond the traditional structural analysis of society to a finer understanding of people as actors. Native Andean initiatives and consciousness are clearly placed at the center of this inquiry, which merges the best methods of history an anthropology.

Stern begins with a vigorously argued theoretical essay in which he identifies major findings and arguments running throughout the book, demonstrates their pertinence to the more general field of peasant studies, and draws out the implications for theory and method. He reappraises the role of peasant consciousness and political horizons; and the significance of ethnic factors in explaining “peasant” consciousness and revolt.

The case studies themselves revamp the history of Andean peasant rebellion and consciousness in Peru and Bolivia. This is accomplished by studying violent uprisings as transitional moments within a long-term trajectory embracing varied forms of resistance, and by scrutinizing closely the ideological and cultural aspects of domination, political legitimacy, and rebellion. The results sharply alter our understanding of three major historical problems: the crisis of Spanish colonial rule and the outbreak of native Andean insurrection in the eighteenth century; the response to peasants to creole wars and nation-building efforts in the nineteenth century; and the political strategies and dilemmas of Andean peasants in the context of populist and radical politics in the twentieth century.