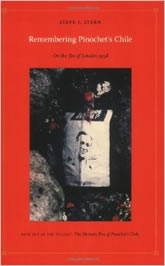 In 1998, General Augusto Pinochet was arrested in London on charges of crimes against humanity. All over the world, but especially in Chile, the shocking arrest thrust the former dictator and the atrocities of his regime back into the public eye. During the two years just before the arrest, the renowned historian Steve J. Stern had been in Chile collecting oral histories of life under Pinochet as part of an investigation in the form and meaning of memories of state-sponsored atrocities. In this compelling work, Stern shares the recollections of individual Chileans and draws on their stories to provide a framework for understanding memory struggles in history. At once analytical, poignant, and personal, Remembering Pinochet’s Chile offers a human portrait of Chile’s memory on the eve of the London arrest.
From a woman who recalls Pinochet’s overthrow of Salvador Allende as salvation from scarcity and chaos to an activist whose husband was tortured by state agents, and from a colonel who served under Pinochet to a mother who had two sons “disappeared,” these stories reveal how people connected their intimate personal memories with the collective memory of traumatic times. They draw the reader into a passionate quest to shape the remembered meaning of trauma and sate atrocity and, ultimately, to control the politics of truth and justice. Remembering Pinochet’s Chile presents not only a rounded portrait of Chile’s specific memory drama but also a method for tracing the historical unfolding of memory struggles in other societies that must reckon with experience of mass violence and crimes against humanity.

Remembering Pinochet’s Chile is the first volume in The Memory of Pinochet’s Chile: A Trilogy. Subsequent volumes will trace the historical unfolding of Chile’s memory drama from the 1973 coup into the twenty-first century.