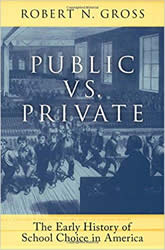 Americans today choose from a dizzying array of schools, loosely lumped into categories of “public” and “private.” How did these distinctions emerge in the first place, and what do they tell us about the more general relationship in the United States between public authority and private enterprise? In Public vs. Private, Robert N. Gross describes how, more than a century ago, public policies fostered the rise of modern school choice. In the late nineteenth century, American Catholics began constructing rival, urban parochial school systems, an enormous and dramatic undertaking that challenged public school systems’ near-monopoly of education. In a nation deeply committed to public education, mass attendance in Catholic schools produced immense conflict. States quickly sought ways to regulate this burgeoning private sector and the competition it produced, even attempting to abolish private education altogether in the 1920s. Ultimately, however, Gross shows how the public policies that resulted produced a stable educational marketplace, where choice flourished. The creation of the educational marketplace that we have inherited today–with systematic alternatives to public schools–was as much a product of public power as of private initiative.

Gross also demonstrates that schools have been key sites in the development of the American legal conceptions of “public” and “private”. Landmark Supreme Court cases about the state’s role in regulating private schools, such as the 1819 Dartmouth v. Woodward decision, helped define and redefine the scope of government power over private enterprise. Judges and public officials gradually blurred the meaning of “public” and “private,” contributing to the broader shift in how American governments have used private entities to accomplish public aims. As ever more policies today seek to unleash market forces in education, Americans would do well to learn from the historical relationship between government, markets, and schools.