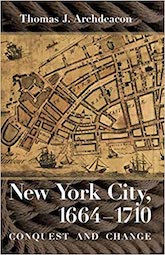 Integrating sophisticated demographic techniques with clearly written narrative, this pioneering book (first published in 1976) explores the complex social and economic life of a major colonial city. New York City was a vital part of the middle colonies and may hold the key to the origins of political democracy in America. Family histories, public records of births, marriages, and assessments, and records of business transactions and poll lists are among the rich sources Thomas J. Archdeacon uses to determine the impact of the English conquest on the city of New York. Among his concerns are the changing relationships between the Dutch and the English, the distribution of wealth and the role of commerce in the city, and the part played by ethnic and religious heritage in provincial politics.