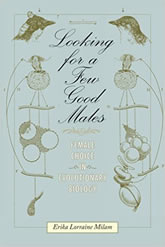 Why do female animals select certain mates, and how do scientists determine the answer? In considering these questions, Erika Lorraine Milam explores the fascinating patterns of experiment and interpretation that emerged as twentieth-century researchers studied sexual selection and female choice.

Approaching the topic from both biological and animal-studies perspectives, Milam not only presents a broad history of sexual selection—from Darwin to sociobiology—but also analyzes the animal-human continuum from the perspectives of sex, evolution, and behavior. She asks how social and cultural assumptions influence human-animal research and wonders about the implications of gender on scientific outcomes.

Although female choice appears to be a straightforward theoretical concept, the study of sexual selection has been anything but simple. Scientists in the early twentieth century investigated female choice in animals but did so with human social and sexual behavior as their ultimate objective. By the 1940s, evolutionary biologists and population geneticists shifted their focus, studying instead how evolution affected natural animal populations. Two decades later, organismal biologists once again redefined the investigation of sexual selection as sociobiology came to dominate the discipline.

Outlining the ever-changing history of this field of study, Milam uncovers lost mid-century research programs and finds that the discipline did not languish in the decades between Darwin’s theory of sexual selection and sociobiology, as observers commonly believed. Rather, population geneticists, ethologists, and organismal biologists alike continued to investigate this important theory throughout the twentieth century.