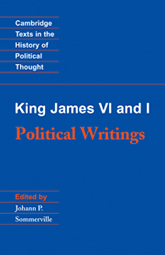 James VI and I united the crowns of England and Scotland. His books are fundamental sources of the principles that underlay the union and among the most influential writings of their period. James’ political philosophy was a moderated absolutism, shedding light on the political climate of Shakespeare’s England and the intellectual background to the civil wars of the mid-seventeenth century. This edition is the first to draw on all the early texts of James’ books, with an introduction setting them in their historical context.