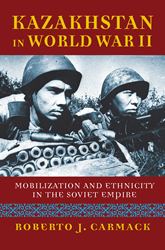 In July 1941, the Soviet Union was in mortal danger. Imperiled by the Nazi invasion and facing catastrophic losses, Stalin called on the Soviet people to “subordinate everything to the needs of the front.” Kazakhstan answered that call. Stalin had long sought to restructure Kazakh life to modernize the local population—but total mobilization during the war required new tactics and produced unique results. Kazakhstan in World War II analyzes these processes and their impact on the Kazakhs and the Soviet Union as a whole. The first English-language study of a non-Russian Soviet republic during World War II, the book explores how the war altered official policies toward the region’s ethnic groups—and accelerated Central Asia’s integration into Soviet institutions.

World War II is widely recognized as a watershed for Russia and the Soviet Union—not only did the conflict legitimize prewar institutions and ideologies, it also provided a medium for integrating some groups and excluding others. Kazakhstan in World War II explains how these processes played out in the ethnically diverse and socially “backward” Kazakh republic. Roberto J. Carmack marshals a wealth of archival materials, official media sources, and personal memoirs to produce an in-depth examination of wartime ethnic policies in the Red Army, Soviet propaganda for non-Russian groups, economic strategies in the Central Asian periphery, and administrative practices toward deported groups. Bringing Kazakhstan’s previously neglected role in World War II to the fore, Carmack’s work fills an important gap in the region’s history and sheds new light on our understanding of Soviet identities.