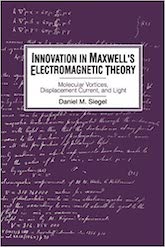 James Clerk Maxwell’s (1831–1879) contributions to twentieth-century science and technology – in particular, the displacement current and the electromagnetic theory of light – are among the most spectacular innovations in the history of physics, but the technical complexities and thematic subtleties of his work have been difficult to unravel. In considering the historical development of Maxwell’s work, Dr Siegel’s close analysis of the original texts – with careful attention to the equations as well as to the words – reveals that mechanical modeling played a crucial role in Maxwell’s initial conceptualizations of the displacement current and the electromagnetic character of light. Beyond this, Siegel locates Maxwell’s work in the full sweep of nineteenth-century electromagnetic theory – from Oersted, Ampere, and Faraday, through Hertz and Lorentz – and in the context of the methodological traditions and perspectives of early physics research at the Universities of Edinburgh and Cambridge.