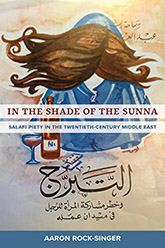 Aaron Rock-Singer. In the Shade of the Sunna Salafi Piety in the Twentieth-Century Middle East. University of California Press, 2022.

Salafis explicitly base their legitimacy on continuity with the Quran and the Sunna, and their distinctive practices—praying in shoes, wearing long beards and short pants, and observing gender segregation—are understood to have a similarly ancient pedigree. In this book, however, Aaron Rock-Singer draws from a range of media forms as well as traditional religious texts to demonstrate that Salafism is a creation of the twentieth century and that its signature practices emerged primarily out of Salafis’ competition with other social movements amid the intellectual and social upheavals of modernity. In the Shade of the Sunna thus takes readers beyond the surface claims of Salafism’s own proponents—and the academics who often repeat them—into the larger sociocultural and intellectual forces that have shaped Islam’s fastest growing revivalist movement.