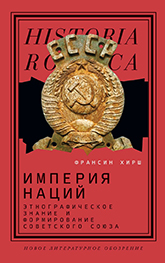 Francine Hirsch. Russian Translation of "Empire of Nations: Ethnographic Knowledge and the Making of the Soviet Union". Translated by Robert Ibatullin. Moscow: NLO, 2022.

Published in English in 2005, The Empire of Nations has already earned the status of a classic study of the history of Soviet nationality politics. Francine Hirsch traces the interaction of power and expertise in the process of state building, showing the contribution of ethnographers, anthropologists, geographers, linguists and other specialists in the formation of Soviet ideas about the nation and race, as well as the development of the very principles of the structure of the USSR as a multinational state. In the 1920s and 1930s, specific forms of state policy towards certain peoples depended on experts who had pre-revolutionary training and relied on Western European ideas. Based on extensive archival research, the author shows how, through planning and conducting censuses, mapping, creating museum exhibitions, the general ideas of the Bolsheviks crystallized into political decisions. The European idea of ​​cultural evolutionism, the Marxist theory of stage development and the Leninist idea of ​​the ability of a revolutionary party to accelerate historical development became the basis of the state policy of integrating different peoples and cultures within the framework of the Soviet project. Francine Hirsch is Professor of History at the University of Wisconsin-Madison (USA).