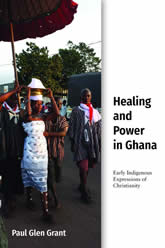 In nineteenth-century Ghana, regional warfare rooted in profound social and economic transformations led thousands of displaced people to seek refuge in the small mountain kingdom of Akuapem. There they encountered missionaries from Germany whose message of sin and forgiveness struck many of these newcomers as irrelevant to their needs. However, together with Akuapem’s natives, these newcomers began reformulating Christianity as a ritual tool for social and physical healing, as well as power, in a dangerous spiritual and human world. The result was Ghana’s oldest African-initiated variant of Christianity: a homegrown expression of unbroken moral, political, and religious priorities.

Focusing on the southeastern Gold Coast in the middle of the nineteenth century, Healing and Power in Ghana identifies patterns of indigenous reception, rejection, and reformulation of what had initially arrived, centuries earlier, as a European trade religion. Paul Grant draws on a mixture of European and indigenous sources in several languages, building on recent scholarship in world Christianity to address the question of conversion through the lens of the indigenous moral imagination. This approach considers, among other things, the conditions in which Akuapem locals and newly arrived displaced persons might find Christianity useful or applicable to their needs.

This is no traditional history of the European-African religious encounter. Ghanaian Christians identified the missionaries according to preexisting political and religious categories—as a new class of shrine priests. They resolved their own social crises in ways the missionaries were unable to understand. In effect, Christianity became an indigenous religion years before indigenous people converted in any appreciable numbers. By foregrounding the sacrificial idiom shared by locals, missionaries, and native thinkers, Healing and Power in Ghana presents a new model of scholarship for both West African history and world Christianity.