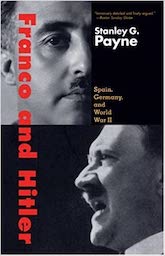 Was Franco sympathetic to Nazi Germany? Why didn’t Spain enter World War II? In what ways did Spain collaborate with the Third Reich? How much did Spain assist Jewish refugees?

This is the first book in any language to answer these intriguing questions. Stanley Payne, a leading historian of modern Spain, explores the full range of Franco’s relationship with Hitler, from 1936 to the fall of the Reich in 1945. But as Payne brilliantly shows, relations between these two dictators were not only a matter of realpolitik.  These two titanic egos engaged in an extraordinary tragicomic drama often verging on the dark absurdity of a Beckett or Ionesco play.

Whereas Payne investigates the evolving relationship of the two regimes up to the conclusion of World War II, his principal concern is the enigma of Spain’s unique position during the war, as a semi-fascist country struggling to maintain a tortured neutrality. Why Spain did not enter the war as a German ally, joining with Hitler to seize Gibraltar and close the Mediterranean to the British navy, is at the center of Payne’s narrative. Franco’s only personal meeting with Hitler, in 1940 to discuss precisely this, is recounted here in groundbreaking detail that also sheds significant new light on the Spanish government’s vacillating policy toward Jewish refugees, on the Holocaust, and on Spain’s German connection throughout the duration of the war.