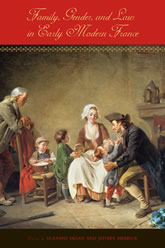 The essays in Family, Gender, and Law in Early Modern France explore how ordinary men and women negotiated power within early modern French households and continually reinvented their families in response to external forces. Larger processes, such as state building, religious reform, changing understandings of gender roles, and economic developments, influenced family practices in the areas of marriage, separation, guardianship, and illegitimacy. Relatives, gender, community, and the law imposed limits upon families but also provided opportunities for agency. Contributors investigate patterns of courtship and decisions about marriage; the financial power exercised by wives; marital conflict and related controversies about gender, sexuality, and social order; death and guardianship; and the legitimization of children born out of wedlock. While addressing a variety of topics, this volume focuses on family members as individuals with complicated agendas and strategies of their own.