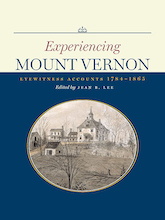 George Washington, acutely aware of the accomplishments and potential of the American Revolution, used his Mount Vernon estate both to preserve the memory of events that had created a new nation and to forward his keen vision of what that nation might become. During the 1780s and 1790s, an era when neither public museums nor a national library existed, visitors to Mount Vernon viewed John Trumbull’s iconic image of the signing of the Declaration of Independence, Houdon’s famous bust of the countryís preeminent hero, and Washington’s voluminous wartime correspondence. More important, they listened as the Washingtons recalled the remarkable events that had forged independence and the unique American experiment in representative government. At Mount Vernon, too, Washington and his guests discussed how best to secure the success and well-being of the United States. Here was a place to contemplate “what the nation, at its best, might be.”

Following George and Martha Washington’s deaths, the estate passed to four successive heirs, the last of whom deeded it to the Mount Vernon Ladies’ Association in 1860. While still in private hands, the property nonetheless attracted thousands of visitors each year, most of whom arrived after a fifteen-mile overland trek from Washington, D.C. With the establishment of regular steamboat access in the 1850s, the numbers swelled to ten thousand annually. The public claimed Mount Vernon as its own. In the words of a nineteenth-century Washington family member, “the Nation shares it with us.”

In a remarkable display of civic religion that testified to the siteís enormous hold on the public imagination, Americans pronounced Mount Vernon sacred ground and made it the nationís most important site of revolutionary memory and inspiration. The sacred ground was, nonetheless, contested ground: visitors criticized the heirs’ management of the property; northerners abhorred the persistence of slavery at the estate. As pilgrims contemplated the highest ideals of the Revolution at Washington’s home and tomb, they often found their own society wanting. Amid escalating sectional strife in the 1850s, some argued that if Mount Vernon could be saved for the nation, the nation might be preserved from ruin.

In letters and journals, newspaper and magazine articles, and public speeches, visitors recorded, often in detail and with intense emotion, their varied reactions to the site. Experiencing Mount Vernon presents the most informative of these accounts, as well as selected documents from the Washington owners (beginning with Washington himself, who in 1784 prematurely wrote Lafayette that, at his beloved home, he had “retired from all public employments”). Numerous maps, contemporary images, and annotations complement the texts. This book constitutes the only eyewitness chronicle we have of the Washington estate’s ascent to the status of national shrine, and it offers the closest possible evidence of Mount Vernonís singular role in helping forge American national identity.