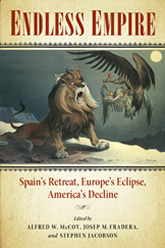 As the American century of global dominion draws to a close, the signs of geopolitical change are gathering like thunderheads on the horizon. Is the United States poised at the brink of decline? What can the downfall of European empires tell us about America’s future as a superpower?

Throughout four millennia of recorded history there has been no end to empire, but instead an endless succession of empires. After five centuries of sustained expansion, the half-dozen European powers that ruled half of humanity collapsed with stunning speed after World War II, creating a hundred emerging nations in Asia and Africa. Amid this imperial transition, the United States became the new global hegemon, dominating this world order with an array of power that closely resembled that of its European predecessors.

As Brazil, Russia, India, China, and the European Union now rise in global influence, twenty leading historians from four continents take a timely look backward and forward to discover patterns of eclipse in past empires that are already shaping a decline in U.S. global power, including: