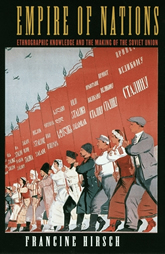 When the Bolsheviks seized power in 1917, they set themselves the task of building socialism in the vast landscape of the former Russian Empire, a territory populated by hundreds of different peoples belonging to a multitude of linguistic, religious, and ethnic groups. Before 1917, the Bolsheviks had called for the national self-determination of all peoples and had condemned all forms of colonization as exploitative. After attaining power, however, they began to express concern that it would not be possible for Soviet Russia to survive without the cotton of Turkestan and the oil of the Caucasus. In an effort to reconcile their anti-imperialist position with their desire to hold on to as much territory as possible, the Bolsheviks integrated the national idea into the administrative-territorial structure of the new Soviet state.

In Empire of Nations, Francine Hirsch examines the ways in which former imperial ethnographers and local elites provided the Bolsheviks with ethnographic knowledge that shaped the very formation of the new Soviet Union. The ethnographers—who drew inspiration from the Western European colonial context—produced all-union censuses, assisted government commissions charged with delimiting the USSR’s internal borders, led expeditions to study “the human being as a productive force,” and created ethnographic exhibits about the “Peoples of the USSR.” In the 1930s, they would lead the Soviet campaign against Nazi race theories . Hirsch illuminates the pervasive tension between the colonial-economic and ethnographic definitions of Soviet territory; this tension informed Soviet social, economic, and administrative structures. A major contribution to the history of Russia and the Soviet Union, Empire of Nations also offers new insights into the connection between ethnography and empire.