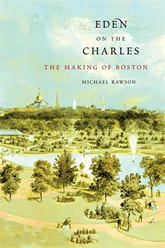 Michael Rawson. Eden on the Charles: The Making of Boston. Harvard University Press, 2014.

Drinking a glass of tap water, strolling in a park, hopping a train for the suburbs: some aspects of city life are so familiar that we don’t think twice about them. But such simple actions are structured by complex relationships with our natural world. The contours of these relationships—social, cultural, political, economic, and legal—were established during America’s first great period of urbanization in the nineteenth century, and Boston, one of the earliest cities in America, often led the nation in designing them. A richly textured cultural and social history of the development of nineteenth-century Boston, this book provides a new environmental perspective on the creation of America’s first cities.

Eden on the Charles explores how Bostonians channeled country lakes through miles of pipeline to provide clean water; dredged the ocean to deepen the harbor; filled tidal flats and covered the peninsula with houses, shops, and factories; and created a metropolitan system of parks and greenways, facilitating the conversion of fields into suburbs. The book shows how, in Boston, different class and ethnic groups brought rival ideas of nature and competing visions of a “city upon a hill” to the process of urbanization—and were forced to conform their goals to the realities of Boston’s distinctive natural setting. The outcomes of their battles for control over the city’s development were ultimately recorded in the very fabric of Boston itself. In Boston’s history, we find the seeds of the environmental relationships that—for better or worse—have defined urban America to this day.