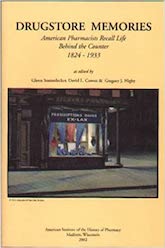 Historical events can be described “from above” or “from the ground.” Historians, from their lofty academic perspective, write analyses and overviews that are supported by erudition and scholarly references. The man on the street, on the other hand, sees events from a different point of view — that is, from the ground — and his description of them, even if it lacks breadth, gives the reader the benefit of the immediacy and charm of the human touch. This book is a view from the ground of health care in the United States in the period between 1824 and 1933. The text consists entirely of “unpolished and unexpurgated” quotations from 59 practicing pharmacists that were found in diaries, memoirs, letters, and reminiscences, both published and unpublished. The quotations are arranged in chronologic order and are divided into two groups, one comprising quotations from the years 1824 to 1860 (part I), the other those from 1860 to 1933 (part II). The melancholic realism of Edward Hopper’s painting “Drug Store” appropriately graces the cover of the book. Old illustrations and photographs (see Figure) are interspersed throughout the text — one, for example, shows two children playing happily and next to them announces, “Cocaine Toothache Drops — Instantaneous Cure! Price 15 cents.” Although the book is concerned primarily with the practice of pharmacy, the medicine and the social conditions of the time unroll in the background as if on a movie screen. In the introduction, the editors provide an overview of the development of the practice of pharmacy in the 19th century. The reader will encounter old and obsolete drugs and treatments (including Dr. Morse’s Indian Root Pills, the use of hot bricks and mustard plaster to treat diphtheria, cod-liver oil, leeches, manna, senna, and castor oil), which are mentioned by practitioners who were familiar with their use. Firsthand experiences are illustrated by dozens of vignettes, anecdotes, stories, and interesting observations. For example, one selection notes that “In the summer of 1832 we had the first and most awful visitation of Asiatic cholera Philadelphia has ever experienced. . . . Many readers remember the camphor bags and Burgundy pitch plaster; the first worn in the bosom, suspended by a string around the neck, and the latter over the abdomen.” Another pharmacist recalls the days when “every child was a stinker because of a little bag of asafetida suspended over its chest.” “It is hard for us to realize,” notes a third, “that but a few years ago the druggist would either dig or buy roots and herbs to make many of his medicines. . . . Now proprietors . . . buy largely [ready-made] articles.” Another explains that “pharmacy laws were unknown in the days of which I speak [the 1860s]. Anyone who chose could sell drugs.” At least one selection focuses on the effects of the 18th Amendment, the National Prohibition Act, which went into effect in 1920: As a pharmacist, I well recall the U.S. government triplicate prescription forms. . . . It was a lot of paperwork. . . . Legal alcohol supplied to hospitals, pharmacies and dental offices often was diverted into other than medical channels. I remember lights in dental offices late into the night and sessions behind the prescription counter of pharmacies, long after they had closed the doors, where “happy hours” were frequent. This book should interest both the nonspecialist and the specialist. Within the limitations of a multiauthored work written “from the ground,” it offers a good and often charming view of pharmacy (with a glimpse of medicine and sociology) as it was practiced in the 19th and early 20th centuries, before the profound changes that occurred after the Second World War. Plinio Prioreschi, M.D., Ph.D.