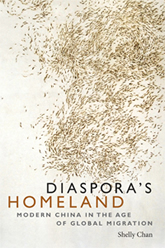 In Diaspora’s Homeland Shelly Chan provides a broad historical study of how the mass migration of more than twenty million Chinese overseas influenced China’s politics, economics, and culture. Chan develops the concept of “diaspora moments”—a series of recurring disjunctions in which migrant temporalities come into tension with local, national, and global ones—to map the multiple historical geographies in which the Chinese homeland and diaspora emerge. Chan describes several distinct moments, including the lifting of the Qing emigration ban in 1893, intellectual debates in the 1920s and 1930s about whether Chinese emigration constituted colonization and whether Confucianism should be the basis for a modern Chinese identity, as well as the intersection of gender, returns, and Communist campaigns in the 1950s and 1960s. Adopting a transnational frame, Chan narrates Chinese history through a reconceptualization of diaspora to show how mass migration helped establish China as a nation-state within a global system.