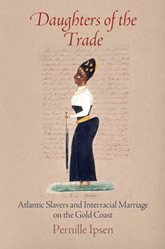 Pernille Ipsen. Daughters of the Trade: Atlantic Slavers and Interracial Marriage on the Gold Coast. University of Pennsylvania Press, 2015.

Severine Brock’s first language was Ga, yet it was not surprising when, in 1842, she married Edward Carstensen. He was the last governor of Christiansborg, the fort that, in the eighteenth century, had been the center of Danish slave trading in West Africa. She was the descendant of Ga-speaking women who had married Danish merchants and traders. Their marriage would have been familiar to Gold Coast traders going back nearly 150 years. In Daughters of the Trade, Pernille Ipsen follows five generations of marriages between African women and Danish men, revealing how interracial marriage created a Euro-African hybrid culture specifically adapted to the Atlantic slave trade.

Although interracial marriage was prohibited in European colonies throughout the Atlantic world, in Gold Coast slave-trading towns it became a recognized and respected custom. Cassare, or “keeping house,” gave European men the support of African women and their kin, which was essential for their survival and success, while African families made alliances with European traders and secured the legitimacy of their offspring by making the unions official.

For many years, Euro-African families lived in close proximity to the violence of the slave trade. Sheltered by their Danish names and connections, they grew wealthy and influential. But their powerful position on the Gold Coast did not extend to the broader Atlantic world, where the link between blackness and slavery grew stronger, and where Euro-African descent did not guarantee privilege. By the time Severine Brock married Edward Carstensen, their world had changed. Daughters of the Trade uncovers the vital role interracial marriage played in the coastal slave trade, the production of racial difference, and the increasing stratification of the early modern Atlantic world.